Today has been a continuation of last night’s shit show. Rhetorical question: how does one parent teens?

Seriously, the amount of stuff on the calendar between last night and the end of this coming weekend is unusually heavy due to a tournament, a kid having been sick, a last minute sleepover birthday party requiring a drop off and a pickup which required some really complicated communications with another set of parents, a bunch of re-organized parent-teacher interviews that caused more, not less stress due to a the above mentioned tournament and…dog sitting.

Dog sitting is a pleasure. It’s fun and relaxing and I enjoy it or I wouldn’t do it.

I also walk a dog at lunch time most days of the week.

Late last night during an ongoing battle about kitchen duty I got a text from our friends if I could watch Molly, the Schnoodle, today.

My original plan was to walk over to get her and bring her to my house this morning. Later at lunch I would have taken her along to walk my client’s dog.

But the shit show from last night continued into this morning and I ended up quitting parenting.

While locked in the shower they somehow managed to get themselves out of the house and off to school. Except, a kid left her lunch. Because of course she did. I now had to work dropping her lunch into my already busy morning.

Whatever. These things happen.

So I changed my plans. Instead of walking to get Molly, I drove to school to drop off the elusive lunch, ran an errand which delayed me by 40 minutes because people at the drug store are idiots, and then picked Molly up in the van on the way back home.

Then we walked over to get my client’s dog, who agreed to the impromptu playdate over text.

So I did just that. I brought both dogs home to hang with me for a couple of hours.

Well I’ll tell you something: this is where all the fun started!

The good news is it helped me forget the issues from last night and this morning.

First, walking two dogs on two leashes is…doable. Sort of. It works mostly if they both want to sniff something at the same time and stay on the same side of the post or tree. It gets a little more complicated if one of them decides to go behind the post while the other doesn’t…alertness is required to keep them from wrapping themselves around the post. I managed this fine (I am, after all, no amateur) until one of them pooped. While that was going on the other decided to do the same.

So now I had to keep a keen eye on where they were pooping, because a lot of brown leaves were littered all around the area making it difficult to see. The poop and the leaves all blend together…Last thing I needed was to accidentally step into dog poop.

But I succeeded in picking up all the waste at which point I looked up to see if there were any garbage bins. We were at a local baseball diamond, typically there are bins at the city parks.

I saw some further down, so we made our way toward them.

This is where the next challenge began.

How does one walk with two leashes and two poop bags in hand?

Finally we got to the bins and I disposed of the bags. Without tangling myself in both leashes and poop bags.

We continued our walk.

When we turned north at my street, the client’s dog in particular got very excited. He’s been to my house twice before and he’s always very interested in the going-ons there. Usually there’s someone there, either another person (my partner working from home) or a dog (Molly), or in some cases, both. Or, if the house is empty, there are crumbs to lick up, things to sniff, items to discover. This little dog lives with two childless adults who work long hours every day so my house must feel like a playground to him.

We don’t come here often on our lunch time walks. Typically only because I have to pee before the walk is done and we happen to be near my house. 🙂

When we got to my house, I open the door, and both dogs go inside and start doing their dog things: sniffing, barking, following me, hanging out, licking up crumbs… I ignored them hoping they’d find a spot to lie down and settle. This did not happen. Several reasons:

It was very windy. There’s a blizzard forecast and since my client’s dog has only been here a few short times, he barked at every unfamiliar noise. This of course got Molly going and I had to listen to two yappy dogs barking at nothing.

When they finally stopped, realizing there wasn’t anything going on worth barking at, I would get a text.

They barked and raced to the door and were inconsolable.

After the third text I turned off the volume on my phone. 😉

Eventually they settled down, one beside me on the dog bed, the other on the floor beside my chair. 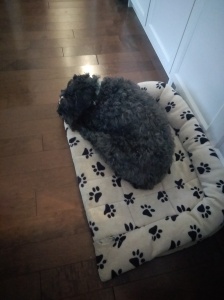 If I so much as moved a leg or shifted on my seat, the little poochie jumped on my lap. (He’s a Bichon Poo, aptly nicknamed a lap dog).

Ask me how to type with a dog on my lap.

What’s worse, he put his paws on my keyboard and started typing his own story.

About a half hour after we arrived, they both finally settled down. Molly went on a blanket on the couch and fell asleep, the other one remained on the blanket under my desk. As long as I don’t get up he stays put.

But I do get up. I got some nuts to snack on and he followed my every step. 🙂

Around lunchtime we’ll go for the standard walk at which point I will return him back to his home for a well-deserved, long nap. Molly can stay with me a touch longer but she, too, will head home before the kids get here.

That would be the kids I stopped parenting this morning…la di da. 🙄

Tonight we get to attend PT interviews for progress report discussions, and visit a high school open house. In between that, we have to drop off the girl child for the party she’s going to. And the boy has to bundle and deliver newspapers.

Send thoughts and prayers I make it through in one piece. 🙂

18 thoughts on “Adventures in dog walking and dog sitting”

This site uses Akismet to reduce spam. Learn how your comment data is processed.

Reproduction of text or images from this site is prohibited. Do not use without permission.